A party and a pony ride

Due to last week’s DNF, I really had a rough go for a couple of days. It was spring break, and we had taken the first half of the week after the race to take the kids to Park City for a few days. I didn’t want to be a bum mom because I was so disappointed, but I knew I needed to have another goal and personal triumph, and quick. This is the way I typically deal with failure; I try to get back on the horse as quickly as I can. I actually wrote a column about productively dealing with failure while in Park City. Can you say, one track mind?!

Moving right along … In order to get my mind off the race and focused on something else, I quickly signed up for a half marathon that would take place the next Saturday (today). It was the Herriman 1/2. This year was the inaugural year for the race, and it looked like a lot of fun. Furthermore, it wasn’t an easy race by any means, with a lot of hills. I didn’t want to run a race that was a cake walk. I wanted to do something hard.

However, I couldn’t call this race and official “getting back on the horse,” so I have deemed it as my “pony ride.”

It was a great pony ride at that.

It started out with the first 2 miles or so going up a pretty steep climb, then it flattened out for a little bit with some down, some gradual up through mile 6. Then from miles 6-8, it was flat to a gradual down. Miles 8-10.5 were a pretty steep climb with rolling hills, followed by a short downhill through to 11.5 or so. Then we turned back around and ran the remainder of the course uphill to a finish on the grass for 200 meters or so.

I just went out and enjoyed the run. I relaxed, breathed and took it at a solid, but not too difficult a pace.

I ended up first overall in the women, with a time of 1:33.10. Results here. I really felt like I had a lot of solid miles left in me, and that was a great confidence builder, which I really  needed.

To top it all off, I won a gift card for a free pair of shoes. And since I don’t need any because I am all Altra-ed up, my husband gets to benefit from it. He needs some new shoes badly. I feel good I was able to do this for him. He really deserves it :). 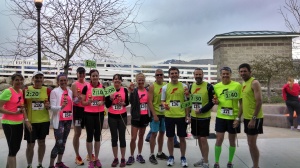 The group of pacers who posed with some Motts juice. Yes, they got to keep it 🙂

Me and Kelli. I have only met her once before, but who I feel like I’ve known forever.

Breathing hard after the finish

Now, what about the “party” part of the title?

Well, our fourth child, Aussie, had a birthday this week. Last year I didn’t do a party, so I promised him we’d do one this year. The problem is, we are not partiers. I don’t like throwing them, and it just seem they are always a dog and pony show for parents, and I am a little … well, a lot turned off by it.

However, a promise is a promise, so I asked him what he wanted to do. He said he wanted to take a few friends for a hike up our favorite mountain, which has been newly named, “Turtle Hill Trail.” This sounded like a great idea!

I texted a few of his friend’s’ parents (no need for formal invites). I gathered a bunch of those string backpack things that we had around the house, filled them with Mott’s products that I have received from being a Mott’s Mom (applesauce, fruit snacks, fruit punch). I also threw in some granola bars, crackers and a few Nilla Wafers. This would be their hiking pack, and we would eat the snacks at the top of the hike while we opened presents. And, yes, I hooffed all the of the gifts up to the top. It actually wasn’t that bad. The kids were great, and it really was smiles all the way … even when we encountered a snake on the way down, which I didn’t get a picture of, darn-it. 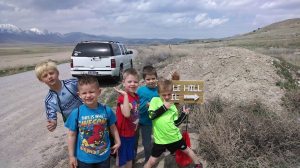 Needless to say, it was a great day. I just love days like this!