This week marks the official first week of summer vacation!

This is an especially important time for our family because it means that we are all off of “work.” I will still be writing for various newspapers and news sources, but that is my place to ramble and vent, so it never really feels like work :).

Adam teaches HS and I teach preschool. We both LOVE our jobs and are extremely grateful not only to have them, but to be able to do something that we love.

The past 4 summers, we haven’t had much of a vacation, being that Adam has been coaching soccer (a fall sport). This has made it so he has been gone doing camps, clinics and things, which has actually proven to be more stressful than the actual school year.

This summer will be our first summer that we are able to spend it all together without all of that added time and stress.

The kids and Adam got out of school on Thursday of last week. I had an ultrasound and dr. appointment that day, and I also had my preschool graduation on Friday, so it was kind of (bleh) having everyone else able to relax and me not being able to. The kids couldn’t quite understand why I wasn’t able to relax as much as they could.

My favorite picture from the ultrasound. I love little feet 🙂

Being that my graduation was in the evening, I did my best to do things that would keep my mind off of the stress of the evening. So, what did I do? Well, I first went for a good, 10 mile run, then I took two of my kids (Aspen and Ace) for a hike up our favorite hill (zig-zag), which is only a 2 mile drive from our house. .  I have only taken all 5 up it before, but Azure was napping, Aussie was feeling lazy and Anderson had soccer tryouts that night (he made the premier team, BTW 🙂 )  so, I got to take 2 kids for the first time ever up the mountain. It was quite a different (but neat) experience. Here is a post I did when I took the kids on the hike 2 summers back, on another blog.

We saw a lot of lizards — that I had to tell Ace not to try to follow, lest he would end up off the side of the mountain. We saw lots of new, wild flowers, which Aspen gathered as she went. We had a good handful of cottontails and jack rabbits dart out in front of us. We even saw a squirrel of sorts, which is something that I never see out here.

As we were walking, the two of them kept saying how slow the walk was, so they insisted on doing a run-walk, which I was more than OK with. One day I will take them on a run all the way up the hill.

We made it up to the top in no time, and we had popcicles and water and I took a few pictures of them. It was really such a great hike that took my mind off of the stress of my day. 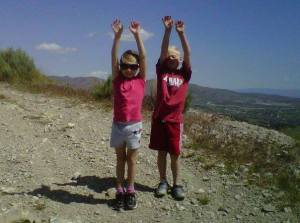 Hooray for the top! 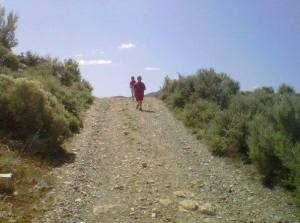 Sprint to the top

Who do you think is older? Well, you’re wrong! Size means nothing; she is very much the older sister :). BTW, check out the trails back there! That is my home away from home!

Preschool graduation went great and I will miss so much the kids that I had this year. Most of them I have had for 2 years, and have really gotten to know them. Good thing we live close and I will get to see them grow up :). 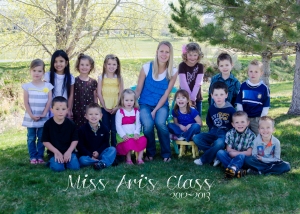 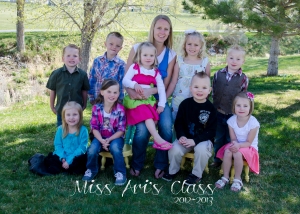 Here is the link to a video that my younger brother made of the school year. So lucky to have him do this for me every year :). BTW, here is a link to his creative mastermind idea “Skakesfear.”

The next morning was the annual Pony Express 5k. This is a race that I have done nearly every year since I moved out here. Last year, it was the race that I got my 5k PR of 17:58 on. It is really such a great race. This year I didn’t do it, and lots of people in my community thought I wasn’t doing it because I was pregnant, but because of the half marathon that I ran last week, it was soon known that this was not the case.  Adam had actually signed up for the Xterra Trail Series, and this was the first race in the series, and it was held in one of our favorite places, Park City. There was a 5k, 10 and half marathon. He signed up for the 1ok.

I wanted so badly to support him in this, and to have the kids go and see him. He kept telling me that he didn’t need us to go see him, but I was determined.

The race didn’t start until 9 am. I knew we had to be leaving by 7 to get there in enough time. So, I got up at 5 am to get my 8 miler in, got home, got the kids up, dressed, breakfast (and yes, I was able to clean up, too), and we were ready and out the door right at 7. Phewww.

Adam is so humble and also a big over-thinker. The whole way up, he was questioning himself and worrying about the race.

I know what a phenomenal athlete he is, and that not only is he in fantastic shape, but he is a fighter. I never have any doubt in my mind whenever I watch him compete, that he will do great. He always does.

When we got there, I made sure to let him go to where he needed to, and I kept the kids away and distracted. I know that there is a certain routine that runners/athletes go through before a competition, and I didn’t want to be a distraction.

We did go to the start to see him off, but then waited at the finish area, being that it wasn’t a great course for spectators.

A little straggly, but so happy to be in Park City watching dad run a race.

The kids found a lot of sticks and rocks to play with. Then about 20 minutes into the race, the race director told me that he thought it might be fun for the kids to get in a line and hand out the finishing medals.

This was a lot of fun for them, and most importantly (to me), kept them from throwing rocks!

They had so much fun doing this, and I’m sure they will remember it for a long time to come. 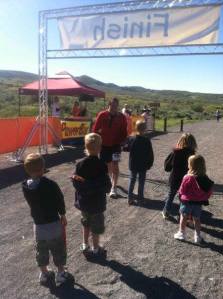 The kids handing out medals.

They took turns really well as the 5k-ers came in. It was really cute, though, that our youngest, Azure was the one who got to hand Adam his medal when he crossed … in 1st place for the 10k! 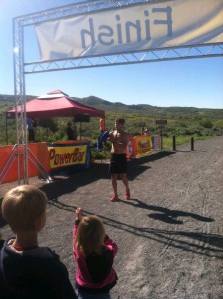 He took his shirt off because the people at the finish needed his #. So he had to stop before to put it back on.
There was some slight confusion for a second, so I didn’t get a good picture … he always looks good, though :).
You can see Azure standing there, ready to hand him his meal.

I am so glad that we were able to watch him, and that he was able to have successful race. I look forward to watching him compete in more races, and to having more fun family activities like these throughout the summer.

BTW, I have an article that came out tonight about the need for summer vacation. Here is the link.

**I have told many of my readers that I would post the links to my articles. If you are in the mood for reading some more, here are some recent ones:

Tips on running through pregnancy

The problem with the insecurites all mothers have

Pregnancy: Why women wait to tell

How to improve your 5k time