Under the Blue Moon 5k

Posted on September 1, 2012 by timetofititin

Last night was one of the most fun nights our family has ever had! We got to run the Under the Blue Moon 5k. This was a race put on by our city, more specifically, our Miss Eagle Mountain. Her platform is to help raise awareness for children with Autism. This is a cause dear to me, as my nephew, Wesley as well as many kids in our school and neighborhood have Autism, and anything I can do to help raise awareness, I will do.

These are my (late) older sister, Megan’s kids. Her son, Wesley has Autism.

I was worried that I wouldn’t be able to run this race because I had my preschool open house set for the same night. Thankfully, I was able to move it to Wednesday…I have such wonderful preschool parents! Although I was able to run the race, it wasn’t the most ideal of times for us. The kids and Adam have just started school, and this has shaken our lackadaisical summer schedules up a bit. We have been soooo busy. Last week, Ace conked his head, needing to get a staple, and right before the race, I had to take him in to get it removed. I should be used to this by now ;). 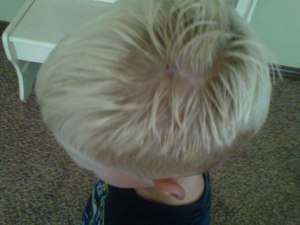 All week, I had been trying to convince Adam to run the race with me. He kept saying no, but I was relentless. He rode his bike 10 miles to school, and then back. We actually passed him on the way to the race, riding home. I called him from the race, and asked him if he would meet me there, and he might just want to bring his running clothes :). He is such a good sport. He did just that.

Thankfully, there was a park there as well as a bunch of little kid activities, which were manned by members of the Eagle Mountain City Youth Council. They had plenty of treats and blue snow cones to keep them company. They even had the Chick-Fil-A Cow there, which, by the way, Azure was terrified of! It was so nice to have two of the young ladies from my Sunday school class at church there. They were so good to keep and eye on the kiddos. Azure’s nursery teacher was there supporting his daughter with Autism, and he was so sweet to play with her. I just LOVE the community I live in!

The race was set to start at 7:30 pm. Adam and I lined up along with the other runners, and I looked at the line, and there was a girl who had painted her face blue for the festivities (you got an award for the most blue). She wasn’t just blue, but she looked super fast! I was right in my assessment, because when the gun went off, she took off!

I had the fleeting thought to go with her, but I just didn’t feel like it. I had a 22 miler planned for the next morning, which was more important to me, so I just stayed at the pace I was comfortable with. The course was and out-and-back, with the first half up hill, and the last half down. So, I’d say it was a pretty fair course. I was so glad to have Adam there with me. We ran the whole way with me, and was even nice enough to let me beat him. What a gentleman :). I finished in 2nd with a 19:17. It felt great, and was really a relaxed, fun run. I did have to find out who the “blue girl” was, though. She ended up being an Olympian! She is a world-class cross country skiier from Vermont, who trains in Park City. She was so nice! I don’t mind being beat by an Olympian. I’ll take that any day! Here is a link to her bio.

After the race, they had a free kid’s run. They were all given “glow-wear” to wear in the dark. It was so cute! It was about half a mile around the park sidewalk. Our kids were so excited to do this! I had prepped them before, and they were just so, so excited!  At the start, the three older kids lined up front, and I held Azure, and stood by Aussie. Right off, Aussie got trampled by lots of runners. It was so sad to see him laying on the ground, crying, because he was the one that was the most excited to run. I hurried to pick him up, and thankfully, Adam came up beside me to grab Azure. I held and consoled him for a minute, but it wasn’t long before he wanted to get back down and run. I stayed behind him, encouraging him as he weaved in and out of runners, passing who knows how many. He just kept going, never even stopped to walk once, and nobody passed him. I was so proud of him, I almost cried. His little 4-year-old legs just kept going. 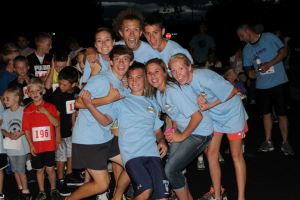 Here are Aspen and Ace (red shirt and blue shirt to the right of him) before the race.

When I got to the finish, I met the older three, and they were all so excited to tell me how they did. Aspen told me that she threw up a little at the end. As gross and horrible as that may seem, I was actually so proud to hear that! This meant that she gave it all she had. Couldn’t be more proud.

A few minutes later, Adam and Azure (2 years old) crossed the finish line holding hands. They were in last place, and smiling all the way. When I told Adam how proud I was of that the 4 older kids ran the whole way, he smiled and told me that Azure had, too! She wanted to hold his hand, but insisted on running the whole way. Hearing this just made me so happy.

The kids all earned free kid’s meals and ice cream cones, which we are going to use today. Adam and I were able to come home with $125 in prize money. Looking forward to a great family night tonight!

I am so glad we decided to run this race. What a wonderful experience. 🙂

By the way, I didn’t take pictures, but I have a friend that did. I will post when I get them 🙂