This morning I ran the annual “Run with Rage 5k.” This race goes to help pay fees for kids who play on the Rage club soccer team in our area. This is a sympathetic cause to me, as I am VERY aware of how expensive club soccer is.

Let me preface this a little bit…Adam and I ran it last year, taking 1st and 2nd, and were pleasantly surprised to have gone home with $200! It was such a fun race. We ended up bringing the kids, and they played at the park while we ran it. I figured we’d only be gone 18 minutes or so, so I wasn’t all that worried. They did great, and were able to run the kid run afterwards. They all got a bag with coupons for free ice cream and pizza. It was so much fun!

This year, though, Adam wasn’t so sure if he wanted to run it again. There were a couple of reasons. One being that he is a coach for the Arsenal soccer club, and our oldest son also plays for Arsenal. Not that they are competing clubs, but in a way, they are. –To be quite honest, “Run with Rage” is a lot nicer than “Run with Guns,” which is what Arsenal would translate to. Could you imagine if we combined clubs?! We would be running with rage and guns…NOT a good combination! I think we should remain in our own domain, and let Rage do the 5ks..haha 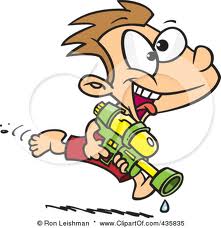 …Unless of course they were water guns… 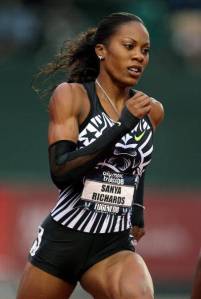 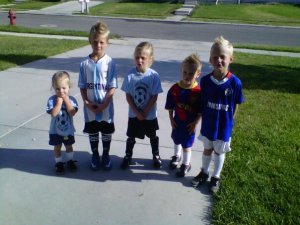 Here are our little soccer players. I had to put this in, because I am one proud mamma 🙂

Another reason Adam and the kids didn’t come was because I had mixed up the weeks. I thought the race was next weekend. It wasn’t until my friend texted me the day before, that I had realized the mix-up. I did a harder run yesterday, took the kids for a long, hot hike up our favorite mountain, and then made an impromptu trip to Seven Peaks Water Park. Needless to say, we were drained. It was best  that they all slept in this morning. 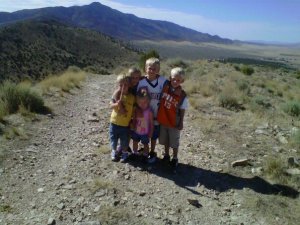 This is at the very top of the hike. They did this pose all by themselves. Aren’t they precious 🙂

Here’s a post I did a bout this hike last year, on my old blog

I, on the other hand, needed to run 16 miles today. Last week, my family took a trip to Colorado, and I wasn’t able to get my long run in, and I was not about to miss out on this one. So, I decided to take this race easier, and use it as more of a tempo training run.

This morning, I wanted to get to the race at least 45 minutes early, so that I could get 3-4 miles in before, but it didn’t happen that way. I wasn’t exactly sure where the race was, because they had changed locations this year, and it took me a little longer than I had planned because even with a GPS, I can’t find anything. I was only able to get  there 20 minutes before the start. This was only enough time for me to get my bib, and then run a 1.5 mile warm-up. The race started on time, and we were all lined up behind the Rage soccer players, as they led us out the first 100 meters or so. It was kind of fun weaving in and out of them, encouraging them along the way. I was out in front in no time, which is not a really comfortable position to me, believe it or not. I would rather have people in front of me. Thankfully, a guy came up beside me, and we ran together for the next 2 miles or so. It was a really hilly course, and I knew that I had 13 more miles to run to complete my mileage, so I eased up and decided just to coast up the hills. I ended up with a 19:10, which I am fine with. It was a good speed work-out, which I kind of needed.

They took a while to do the awards, so I ran around, and ended up getting 5 more miles in. They awarded $100 to the first place finishers again this year, which I was super happy about. Our entry fees helped their boys, and my prize money is going to help pay for my son’s soccer fees…haha 😉 We all win!

After picking up my award, I ran home to get the remainder of my mileage in. I came up a teensy bit short, so I mowed the lawn…and the neighbors ;)…and took the kids for pizza and along grocery shopping. I think that made up for my shortage.

What a fun start to a day!