It’s been a while since I’ve bought new running shoes…about 7 months to be exact, averaging about 40-5o miles a week. I am one who will squeeze every little bit out of my stuff before I buy anything new. Heck, I even pour milk INTO the chocolate syrup to get every last drop out of it (my husband thinks it’s disgusting). Needless to say, I think I got as many miles out of my Adidas Adizero Bostons as I possibly could…

They were getting holes. Both in the same spot on each shoe. Must be a indicator of consistency?... 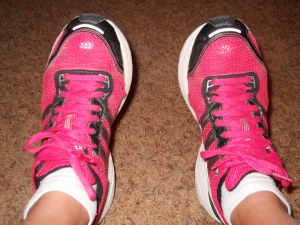 As a side note, they worked fine and felt great,

but figured that I shouldn’t risk my feet falling out of them in the middle of a long run :).

So, on St. Patrick’s Day weekend, I won some free shoes from the Spectrum 10k (post found here). When I went to the store, they didn’t have any shoes that I wanted. I love Adidas, and they didn’t carry them. So, I tried on the first shoe that caught my eye, thinking that I would just wear them around as everyday shoes, since they were free. Those shoes were some bright orange New Balance Minimus Trail shoes.

These  are a minimalist shoe, with a zero drop.The second I tried them on, I fell in love. They literally fit like a glove. I loved walking in them, but was  little hesitant to run in them. When I got back home, I tried them out. I set out on the road and I HATED it!  I felt my feet slapping on the ground. It was terrible! I remembered that they were trail shoes, so I ran to the nearest trail, and boy, was there a difference. All of a sudden, it was like they had transformed! My feet felt like they were floating. Even with the dirt and rocky terrain of the mountains, I felt nothing. The first day I did 7 miles in them, and it was awesome! The next day I did 12, and it only got better. Love these shoes…only on the trail, of course.

Here are some awesome commercials about them…

Although I was elated to have found some awesome new trail shoes, I was still left with no shoes to run the roads with. It has been a rough transition, as I have had to alternate my NB Minimus with my beat up Adizeros. I have even worn my racing flats on a few runs. But, I finally found some new shoes! Today, in fact, I went to the Runner’s Corner and picked up some NB Minumus Road shoes. 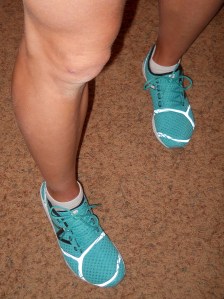 I tried them on and they felt great! In fact, I actually had Adam drop me off on the way home so I could do my 6 mile run in them. Normally, I would suggest walking around in your shoes for a day before you run in them, but I was in desperate need of new shoes, and I have to do 14 miles tomorrow, and I wanted to break them in somewhat before then. Luckily, there was no breaking in to be done! By mile 2, I felt like I was flyin’! My feet were so light. So awesome! I even forgot to take them off when I got home, which is unheard of for me. One more thing I love about these, is the tongue. It is connected to the shoe entirely on one side, but open on the other, to allow your foot to fit it without much trouble. And it doesn’t move. I have always had problems with my tongue sliding down, and this doesn’t at all. LOVE THESE SHOES!

Last, but not least my Unshoes. I have mentioned these briefly in a few posts, but I need to mention how awesome these are! A friend of mine from high school created these huarache style sandals. They can be used for everyday wear, and yes, even running! They are modeled somewhat after the sandals worn by the Tarahumara people, a Native American Tribe known for their running people. These are not just any sandal. Terral, the owner, hand makes these and has them custom fit to your feet! How awesome is that?!! I haven’t done a whole lot of running in them, as I am new to this whole mimimalist thing, but I have run around the neighborhood, and had no problems at all. Mostly, for now, I just love them for everyday wear. They are so comfortable that there have been times when I have even forgotten to take them off before going to bed. They were featured in The New York Times just last week, as a “Spring essential.” I would have to agree completely! 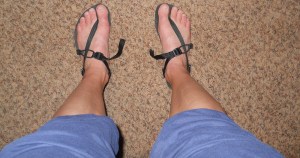 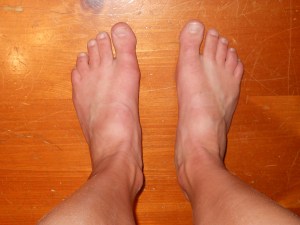 I am even beginning to sport an awesome tan line, which I am ELATED bout!

Thanks to these three pair of shoes, I now have blissfully happy feet!

This entry was posted in Uncategorized and tagged trail shoes. Bookmark the permalink.