I do so like a good game of tag. The other day, in fact, I took one of my preschool classes to the park to play, and as usual, I ended up having 12, 4-5 year-olds chasing me! It was awesome! Although I was able to have the chance recently, to play a “real” game of tag, this luxury has lessened and lessened as I have gotten older. I am no longer allowed to run freely, weaving my way under, over and around the play set out at recess. In my older years, playing tag has earned a new, slightly more complicated, yet more tactical meaning…

…Tag is now between only two players (my husband and I). Rather than one trying anything and everything to avoid being tagged “it,” they are anxiously awaiting their turn to be “it.” Yes, I am talking about the daily “game” that Adam and I play, while trying to each get our own work-outs in. Physical fitness is equally important to the both of us, and we do all that we can to allow the other a turn to be “it.”

Here are a few recent examples:

A few weeks ago, I had to get a 10 mile run in. We also needed badly to go to the grocery store. It was getting late, and Adam hadn’t yet gone for a run either. So, we decided that I would do the 10 mile run to the store, bring my card along, and do the grocery shopping as soon as I got there. Adam then loaded up the kids in the car, and drove to pick me up. He, then ran home from there. This has happened on more than one occasion, and I’m sure will happen again…

I remember my mom doing the same thing for my dad when he was doing his marathon training. We would be driving in the car, when she would stop, and my dad would hop out and run home. You do what you gotta’ do!

We have now begun doing track work-outs at the HS that Adam teaches at. Once a week, I will pick the kids up from school, and we will go to the HS. While he does his intervals, I watch the kids, then we trade. This is one of the kid’s favorite activities. They look forward to it every week!

Now, there are the rare yet AWESOME times when Adam and I get to both be “it” at the same time.  A few weekends ago, I went with Adam to a soccer coaching training in Las Vegas, while my parents watched the kids. Both days, we were able to run together. On the second day, we ran on the Strip, and then finished out 12 miles with 3 fast miles on the UNLV track…the last 3 were done in 19:35 (I was pretty stoked about that!)… It was so much fun, and it brought back so many memories of when we were dating in college, and being on track trips together. It was a great getaway.

Here are some random pics of he and I…mostly him, because he’s awesome!

In Vegas the night we got engaged. It was the weekend of our conference championships.

When we were dating, I made this silly little picture...I was in love...

Adam running the 800m...in the wind!...as of that race doesn't hurt badly enough without it! 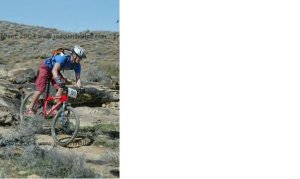 His first mountain bike race...he won, of course! Did I mention he was a stud? 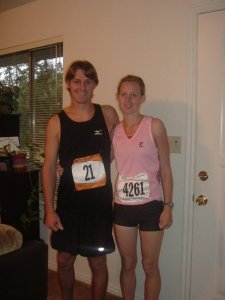 This new game of tag is starting to grow on me! It requires a lot more planning and coordination, but I love the challenge and I couldn’t have picked a better teammate!

PS…I added pictures from the Spectrum 10k to my last post, in case you wanted to see them 🙂

This entry was posted in exercise, health, running, Uncategorized. Bookmark the permalink.