My name is Arianne, and I love to run!…Hence, the title of the blog, “run ari ran” (run Arianne). For a while now, I have wanted to write about running, from my perspective. And though I know that I am not the first, nor the last to want to write about running, hopefully my stories and insights will inspire others to find their passions.

I am going to first start off by addressing a question that I get asked all the time. Why do you run? Mostly this question is meant by others to be rhetorical, but I will answer it nonetheless, in the best way I know how….by starting at the beginning, with my story….

I want to first take you all to a familiar place…the elementary school playground, aka recess!. We’ve all been there. It is 30 minutes filled with fun games of kickball,  tether-ball and what else, kissing tag. Yes, we all remember kissing tag. A game where boys chased girls, and boys kissed girls. Well, guess who never got kissed?…Yep, you guessed it…and not because I wasn’t cute (on second thought….um…never mind that), it was because I was FAST! And not the way the boys chasing would have hoped. They just couldn’t catch me! I remember thinking how fun it was to run fast. It felt good. It felt natural. It made me feel like….me! It was there where running Arianne was born.

My parents saw my potential, and helped me along and supported me by packing up the family station wagon to drive to meets in Arizona and all the way to Florida. I continued running in middle school and high school, just having the time of my life, doing what I loved! I look back on those years as times when I felt most alive. 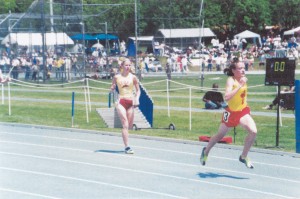 Now, amidst all this fairytale-ish happiness, I did encounter what most runners would refer to as “burn-out.” Unfortunately, mine was during my four years as a Division 1 collegiate athlete—the time when I should have been at or near my peak ability. You could attribute this to all sorts of things—the stress of school, pressure to perform at a high level, being newly married, away from home. Any or all of those things. Nonetheless, during those years, running was not fun. It was a job, that I could not wait to end… 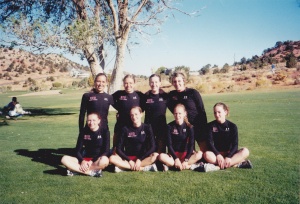 …And it did end–and may I say at the right time, and in a perfect way. We found out during my last cross country season that we were expecting our first child! And yes, I finished out that last cross country season with my best one I had ever had! At 12 weeks along! Call it what you will…hormones, whatever. I know, though, that it was because I was once again running for me. Free from other worries. I felt free again, to do what I loved, and what made me, me.

Over the years, I continued to run. In between having babies…five to be exact (in as many years). I would go out for a slow 3-5 miles here and there, just to clear my head. It wasn’t until after having my 4th child, that I caught that competitive bug again, and it feels good to be me again!

I have since run three marathons, my fastest I clocked last year at 2:58.35. I have also run 6 halves, with my fastest a 1:20…and hopefully picking up speed… 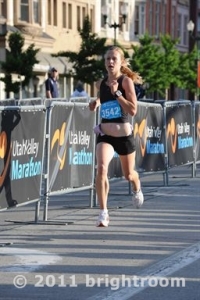 I have rediscovered my passion!  It has centered me in a way that I have difficulty describing. It has made me a better wife, mother and, what I feel, a better person.

10 Responses to Why Ari Ran